Apple announced on Tuesday that its most famous Apple Store design feature will return next year.

During its iPhone launch event, Apple’s head of retail Angela Ahrendts said that Apple will rebuild its iconic glass cube on 5th Avenue in New York, which will open next year.

In the meantime, there’s still an Apple store at the 5th Avenue location, but it’s in a temporary store, and the cube has been taken down. 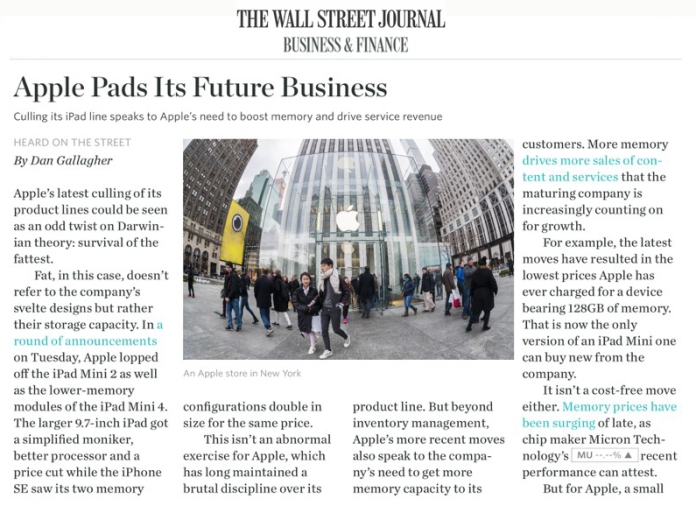 “Sure to Grab Attention”- NY Times

“The @spectacle pop up overlooking the @apple store” – Business Insider

“You couldn’t miss this one. Snapchat’s eye logo was plastered across the top of the Midtown building, bigger than most billboards.”– CNET

Asked about the proximity to the Apple Store, the exec insisted that Snap was “more interested in being near Central Park — it’s a great place for visibility.” NY Post

“If you’re looking for the purchase location in New York you can’t miss it– this giant banner across from Apple’s flagship store will stand out.” CNET

“The slew of nearby retail stores that will soon be lit up with holiday window displays gives Snap’s store a lot of visibility in a busy area of the city. Perhaps more noticeable though, is a vertical sign printed with the Snap eye that hangs above the store, similar to the company’s secretive billboards. ”– ADWeek

“I can’t think of a single better location”– Uber

“5 East 59th Street near the corner of 5th Ave, right next to the Apple Store. Judging by the facade outside, it shouldn’t be too hard to miss”

I can’t think of a better Location– The Verge

“The New York lines ran around the block”– USA Today

“The entire facade of a building close to 5th Avenue got a makeover, now donning an enormous yellow banner with Spectacles’ eye logo looking out over the city.” – The Next Web

“in a space of its own, an empty store front opposite Apple’s store on the southeast corner of Central Park”– Slash Gear

Snapchat, the short-term photo messaging app, has opened a pop-up location at the former Playboy Club. The is the first physical store for the company, which it will use to market its new picture-taking sunglasses.

The social media app will occupy the entirety of 5 East 59th Street between Madison and Fifth Avenues through New Year’s Eve, according to Snapchat’s website. The store, which officially opened yesterday, will be closed only on Thanksgiving as well as Christmas Eve and Day.

Asking rent in the deal was not immediately available, but brokers with Winick Realty Group were previously asking $14 million a year for the space.

The building includes a 5,000-square-foot ground floor that has 22-foot ceilings. Much of the nine-story structure façade has been covered with a yellow banner brandishing Snapchat’s logo. The property sits across the street from the Apple store at 767 Fifth Avenue, otherwise known as the General Motors Building.

GreenOak Real Estate and Capstone Equities put the building up for lease last year, tapping Winick’s Darrell Rubens, Lee Block and Kelly Gedinsky to market the 40,000-square-foot building. The Winick team represented both the tenant and the landlord in this deal.

Rubens said this is Snapchat’s first brick-and-mortar store in which it is marketing the company’s new “Spectacles.” The sunglasses are outfitted with cameras that allow the wearers to record photos and videos of what they are seeing, which is then wirelessly uploaded to the Snapchat app.

“We have been marketing it as a stand alone creative space to showcase a brand with a retail component,” Rubens said of 5 East 59th Street. The team has been looking for “a new brand who would have a synergy with Apple.”

Snapchat has been setting up “Snapbots”—vending machines that sell the glasses, which will also be featured in this location. The company has also dropped them in recent weeks at the Grand Canyon and the Rose Bowl in Pasadena, Calif.

New Yorkers have been known to queue up for many a hot-ticket item: dinner reservations, iPhones, Cronuts.

On Monday, Snapchat Spectacles joined that list as hundreds of people lined up for a chance to buy the eyewear. And after six hours of waiting — first in the wintry cold, and then in a sparsely decorated pop-up store off Fifth Avenue — I finally claimed mine.

First, a primer. Spectacles are sunglasses with embedded cameras that Snapchat introduced two months ago with the aim of funneling ever more videos to its service. The $130 eyewear records 10-second videos and then wirelessly sends them to the user’s Snapchat app.

As Snapchat’s parent, Snap Inc., is preparing to go public early next year, the company is betting that it can increase the amount of disappearing video content that parades on its burgeoning platform. Spectacles, if they become a hit, could help bolster that goal.

It’s too early to say whether the trendy sunglasses will succeed at that. But it’s no joke to say that they have quickly drawn a following in Manhattan.

Snapchat has kept the locations of its Spectacles pop-up stores secret — they’ve appeared in the Los Angeles area; at the Rose Bowl in Pasadena, Calif.; in Tulsa, Okla.; and even the Grand Canyon — but a pop-up in Midtown Manhattan by the glass-cubed Apple Store was sure to grab attention.

Inspired by an editor’s Twitter post about the pop-up, I headed over and arrived around 8:30 a.m. The line by then snaked around the corner of Fifth Avenue. Not too long, I thought foolishly. So, I took my place.

Within minutes, more and more people arrived, braving the late November cold and flurries. Snapchat employees decked out in identical uniforms — black jackets, black jeans and Common Projects white sneakers — occasionally patrolled the line and counted the attendees. Construction workers dismantling scaffolding outside A La Vieille Russie antiques gallery at the corner repeatedly admonished those standing in line to move closer to the building to avoid getting whacked by an errant pipe or beam.

The attendees were a mix of those whom one might expect and those one might not. Three staff members from the ad agency McCann gathered behind me. One of them, Timothy Min, an ad director, had dashed into the line out of breath, having commuted from Brooklyn via Citi Bike, subway and a frenzied run.

There were men in suits and loafers and some apparent tourists.

At least one victorious buyer walked back down the line, wearing one pair of Spectacles while hawking the other pair that he had bought with gusto. “Four hundred and you can leave the line!” he shouted. It’s unclear whether he found any takers.

Reporters from USA Today and other outlets descended, along with the temperature. By 9:30 a.m., Snapchat employees had handed out wristbands to some of those in line, demarcating in purple plastic who was assured an opportunity to buy up to two pairs of Spectacles. I received the second-to-last bracelet.

By about 12:30 p.m., the last of us were ushered into the pop-up space, which had once housed the restaurant and cafe Bottega del Vino. Once warmly decorated, it was now rendered stark white, with brick walls and an exposed industrial ceiling. Television monitors hung from one wall, rotating as they displayed footage captured from Spectacles.

At the far end, standing apart from the crowd, was the bright yellow “Snapbot” vending machine that dispensed the glasses.

Even inside, time passed slowly. Word circulated that the Snapbot was having trouble reading some credit cards. Some customers were busy taking videos of themselves and others buying the glasses. Mr. Min of McCann worried that he would run late for meetings that he had already postponed on account of his consumerist adventure.

Debates arose over which colors to get: stylish black, colorful blue or ostentatious coral. A Snapchat staff member said the most popular choice was black, followed by the teal-like blue. All decisions were final.

Several people sat on the floor, peering intently at their smartphones. A few others animatedly discussed how much they could sell their Spectacles for.

For the record: Spectacles appeared to sell, on the low end, for $350 on eBay, topping out at more than $2,000. At a few points, staff members drew a curtain in front of the machine, presumably to perform mysterious incantations — or just to restock the Snapbot.

Though the line was officially cut off two people behind me, a lengthy crowd remained outside. One man pressed his nose against the glass, then placed his palm against the store window while taking a picture of it, a portrait of melodramatic forlornness.

Around 1:15 p.m., the store’s white blinds began to descend, slowly closing off the view of the store from the crowd on 59th Street. Perhaps it was to prevent the appearance of pictures of a half-empty boutique.

Just before 3 p.m., my turn at the Snapbot finally came up. The vending machine has three giant buttons representing the colors of Spectacles, with a round screen kitted out with Snapchat’s famed lens technology, virtually placing a pair of the glasses on my face as I made my decision. Within five minutes, and after two swipes of my card, I walked away with two pairs, one black and one blue.

By 3 p.m., the final customer — Joey Pennacchio, the creative director for a video game start-up in Los Angeles, who snagged a wristband from a departing customer and persuaded Snapchat employees to let him into the store — took his turn at the Snapbot. After handing his phone to a security guard to take video of the buying experience, Mr. Pennacchio bought blue and coral Spectacles.

“I’m super stoked to get my hands on them,” Mr. Pennacchio said before his purchase. “I came in with pretty low expectations, but the vending machine is pretty cool.”

Snapchat employees cheered at the end of their 10-hour workday. The minimalist store would be cleaned up and prepared for the crowds that would surely be lined up when it was scheduled to reopen on Tuesday afternoon.

Mr. Pennacchio and I walked out of the store — and within minutes of leaving, he told me that he had found a taker for one pair, for $450.